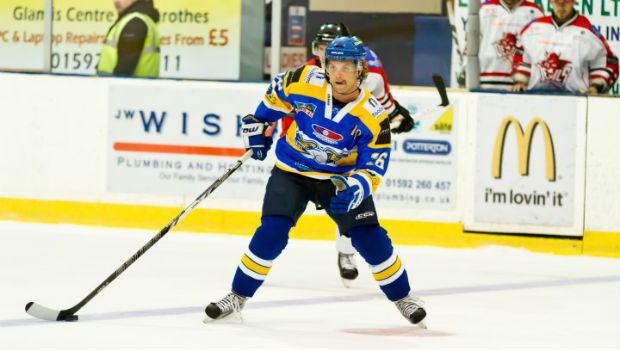 Fife Flyers have announced that their Player of the Year Jordan Fulton will be staying with them for the 2014/15 season. There was huge interest in the 6’0 195lbs forward from various teams across the UK and Europe, but Fulton decided to return to the Kirkcaldy based club for a second season, a move which is sure to delight the Flyers fans.

In 2013/14 the 26 year old Minnesotan won Forward of the Year, Top Points Scorer, Player’s Player and Player of the Year at the 2013/14 Fife Flyers End of Season Awards, which shows just how popular he is with both team mates and fans alike. Fulton will don the #26 jersey once again for the Flyers and is excited about the season ahead.

On re-signing Fulton said “I am very excited to be coming back to Fife, I really enjoyed my time there. I loved playing for Dutes and Stewy. We had a great group of guys and with a lot of our core coming back I think we can do something really special next season. The run we went on last year was the most fun I’ve had playing hockey in a long time. We have the best fans and atmosphere in the league. I’m very excited to be a Fife Flyer again.”

Head Coach Todd Dutiaume added “In my year end meeting with Jordan he expressed an interest in coming back to Fife for another season, obviously I was delighted as he was identified as one of our main targets.”

“Fults was an absolute machine for us last season. He played in all situations, ate up incredible amounts of ice time and was one of the hardest working guys I’ve played with or coached. I look forward to seeing Fults in a Fife jersey and wreaking havoc on opposition defenders once again.”