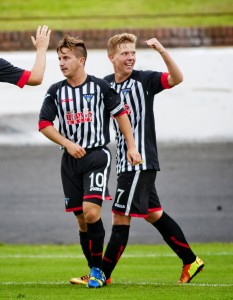 Dunfermline claimed the spoils and progression to the next round of the Harry Ramsdens Cup with a gutsy 3-1 victory over hosts Cowdenbeath. Nathan Wedderburn put Cowdenbeath in the lead and they were unlucky a short time earlier when Jordan Morton saw an effort come back off the upright.

The Pars rallied but must have thought it wasn’t to be their day when Ross Millen saw his penalty spectacularly saved. Millen redeemed himself with an excellent cross from the resulting corner which was easily converted by Callum Morris.

Declan O’Kane then hit the post for Dunfermline with a header and in the 65th minute their renewed pressure paid off when Ryan Ferguson had a tap in from six yards.  The scoring was completed by Ryan Thomson who managed to get on the end of a Craig Dargo cross in the 80th minute to guide the ball beyond the goalkeeper from the edge of the area.

Cowdenbeath’s Lewis Milne was given a straight red card late on as tempers frayed and their goalscorer was stretchered from the field late on, leaving them to finish the match with nine men.

Ryan Wallace who scored the clincher revealed that the Pars manager had given the team a roasting at half-time and went on to praise his team, saying

“The second half was like night and day and it proved just how good the squad is. Even though we are young it shows that we can beat a First Division team. The team is good enough for that level, all the young lads are very very capable of playing at that level.”