Blair Jenkins, Chief Executive of Yes Scotland sets out why he believes a Yes vote is vital in the 2014 independence referendum. He is the public face of the all-party and none campaign for Scottish independence. To read more about the Yes side of the debate go to: https://www.YesScotland.net 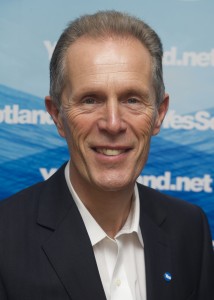 In September 2014 we will have the chance to shape the future of Scotland for generations to come. We are working hard to press home why a Yes vote in the referendum is a vote for a better, fairer and more prosperous Scotland.

At the heart of our positive argument, is the fundamental belief that decisions made on Scotland’s future should be taken here in Scotland. It’s clear that Westminster isn’t working – 91% of our MPs opposed the bedroom tax, yet Westminster imposed it. With independence, Scotland will always get the government it votes for.

Being independent means the revenue from our vast offshore renewable energy will come to Scotland, allowing us to benefit communities the length and breadth of the country. Across the world natural resources are becoming more and more important. And not just energy, but also things like water which we have in abundance.

Independence will give us an opportunity to use our ample supplies of water to attract a range of businesses that rely on a steady and reliable source of water, creating a new source of tax revenues and jobs.

Scotland’s towns and cities once made us an industrial powerhouse. Proud families throughout Fife contributed to a vital manufacturing and export industry and renewables give us the opportunity to create the kinds of jobs that will not only provide vast employment opportunities once more, but place us at the forefront of clean energy creation.

In creating a fairer Scotland, independence allows us to rid ourselves of costly and immoral weapons of mass destruction and prevent our armed forces from participating in illegal wars. Scotland will have an important role to play on the global stage and we can look forward to being welcomed to the family of nations.

In contrast to what is undoubtedly a bright future, the relentless tide of negativity and attempts to project fear instead of hope by the No campaign debases what should be an informative, measured and respectful debate. The people of Scotland deserve nothing less.

However, the more our opponents tell us only that ‘Scotland can’t’, the more determined we are to show why we have got what it takes to be a successful independent country and that we most certainly can be a better, fairer nation.

As the referendum debate develops over the next year and more, and as we continue to put our positive vision for Scotland across, it has become noticeable how few people now claim that Scotland is too poor or too stupid to prosper as an independent nation. Even Scottish Labour now openly admits that an independent Scotland could ‘flourish’ whereas previously it conceded only that it could ‘survive’.

Government Expenditure and Revenue figures for 2011-12 show that Scotland generates 9.9% of UK taxes, yet we receive only 9.3% of UK public spending to run vital services like schools and hospitals.

We do not underestimate the task. We at Yes Scotland know we have to work hard over the next year to persuade large numbers of Scots who are currently unsure how to vote. But we also know that a story of hope and optimism will always trump a narrative of fear.

We have already established the biggest community-based campaign in Scotland’s history with more than 200 Yes groups the length and breadth of the country. We have held around 1,000 Yes events so far at which key figures in Yes Scotland as well as our growing band of ambassadors have spoken – but also listened and learned – about the priorities and aspirations of people in our communities and interest groups.
We will continue to build on that network because it is by taking the independence debate into local communities – into pubs, village halls, churches, local business groups and on doorsteps in places such as Glenrothes, Kirkcaldy, St Andrews, Dunfermline and all of Fife– that this campaign will be won.

We have had hundreds of people dropping into our public information hub at the Yes Scotland HQ in Glasgow’s Hope Street. And, of course, we look forward to welcoming many more. Yes Fife are now a well-established group and I urge anyone looking for more information and converts to our cause to make contact with them.

What is at stake is far too important to be left to politicians alone. We’ve always said that this is the people’s campaign and the people’s referendum.

Well over one million people in Scotland want our nation to be independent. A similar number want the Scottish Parliament to have more powers.

Many people are still to make up their mind and it’s therefore vital that we stay focused on why we want to complete the home rule journey by becoming a normal, independent nation.