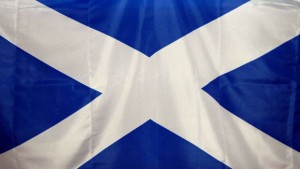 Over the weekend, the Daily Mail published a series of articles about so-called “Cybernats”. That is, people who support Scottish independence who debate and campaign on social media. They chose to take surreptitious photos of certain individuals who post on Twitter and then confronted them on their own doorsteps. These “Cybernats” were accused of poisoning the debate on independence and featured in a two-page spread alleging that they abused those who disagreed with them.

Many of the comments quoted were pretty tame stuff and the rest were much what you would expect if you have ever posted on any kind of internet forum on any topic. There was what we will call “robust” language but that is how people speak and to disagree with someone is not the same as abuse. The article was very one-sided and neglected to mention countless vile comments about senior SNP politicians, especially First Minister Alex Salmond. Doing his job as First Minister has seen the following abuse on Twitter: 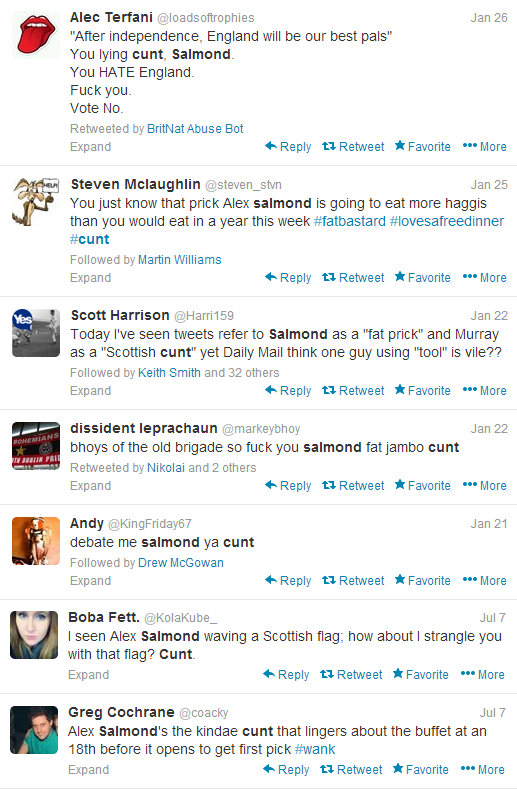 We read last night one example of the real poisoning of the independence debate. Someone posted the following on Twitter:

This kind of thing has no place in political debate and we hope that Police Scotland deal with this individual appropriately. Leaving aside the idiocy of the comment, it is interesting to look at how we reached the point where people feel that it is OK to make public death threats against the democratically elected First Minister of Scotland.

There has been a concerted attempt by opposition politicians to target Alex Salmond on a personal level, taking aim at what they see as believable vulnerabilities. There has been smear after smear and no matter how resilient he is, some of these are bound to stick. In no other walk of life would it be acceptable for journalists to routinely refer to someone in the way Alex Salmond is referred to. His weight is routinely commented on as is his perceived arrogance. His opponents know that they can sell his self-confidence as the negative traits of arrogance or smugness and there has been an effort over some time to do just that.

A senior aide to the Leader of the Labour Party in Scotland Johann Lamont sparked controversy when he asked if Alex Salmond was “an arse” on social media. Paul Sinclair who was previously a journalist at the Daily Record was apparently unrepentant when asked about it by fellow Twitter users. Those appalled included Mandy Rhodes, editor of Holyrood Magazine.

As bizarre as it sounds, it is not a new occurrence for Labour staff to use expletives to describe Alex Salmond, with one being forced to resign previously in 2007 after referring to Mr Salmond a “c*nt” at an awards ceremony.

It is not only Labour staffers that are responsible for this, their bosses the elected politicians must be held accountable too. Johann Lamont has sailed close to the wind a few times with her descriptions of the First Minister at FMQs, showing little respect for him on a personal level with terms like “chancer” and other choice phrases implying he is a liar. Several of her party colleagues have gone much further and compared the First Minister to various dictators across the globe.

Margaret Curran, a Labour MP even went as far as to say ““I think if Alex Salmond went under a bus tomorrow – not that I would ask who drove that bus…”.  This is the true poisoning of the debate, it is people in senior positions referring to Alex Salmond and his colleagues in such openly derogatory and disrespectful terms. It is almost de-humanising in it’s nature and is widely reported and supported in the press, This type of comment has become almost ubiquitous and many people will parrot it as if it was their own idea when in fact they are just repeating what they have read.The abuse by senior politicians gives their colleagues in the press and those lower down the food chain permission to do likewise. Large sections of the press are complicit in the name calling and abuse.The bile aimed at Alex Salmond by opponents will only continue to intensify now as we approach the referendum in September and Police Scotland were concerned enough that they appointed a security adviser to the First Minister recently.  We sincerely hope that this systematic poisoning of the debate by senior politicians and newspaper journalists does not come to something more tangible than online threats. If it does, they will have serious questions to answer.